Guess What! Tupperware Sure is Collectible! 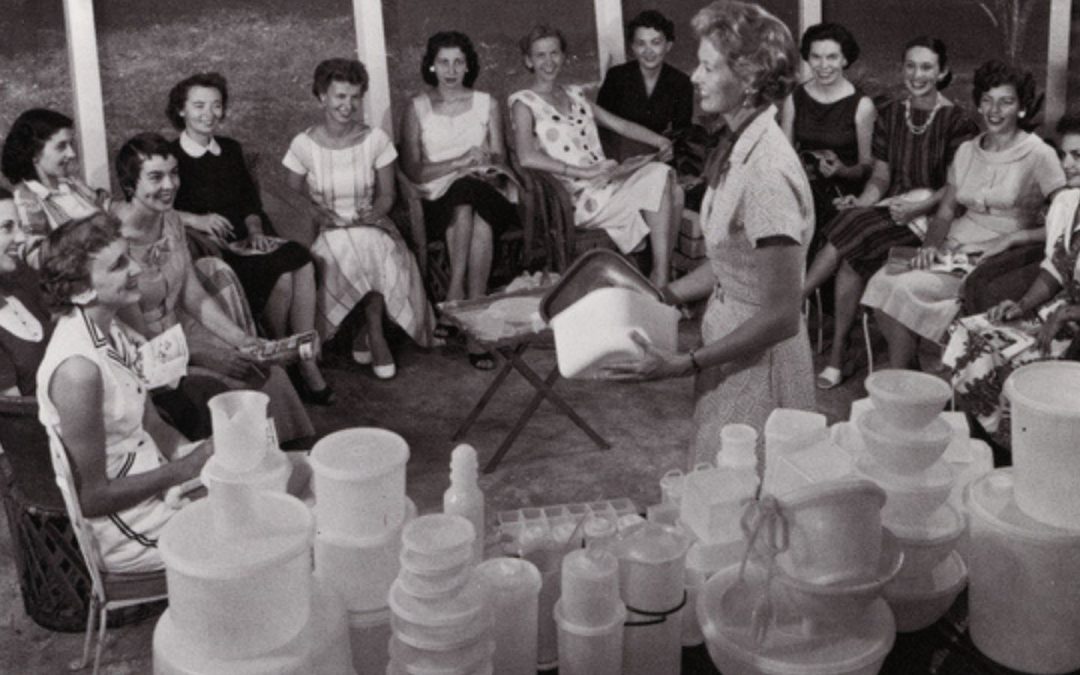 Vintage Tupperware is a fun and useful collectible. You probably remember it from your childhood! Everyone’s mom had some Tupperware – or a lot of Tupperware – in their cabinets!  Though it’s no surprise that midcentury modern looks are back in vogue, it turns out that the trend extends not just to furniture but to — of all things — Tupperware.

Yup, that old Tupperware that’s been sitting around the house for decades might be worth quite a bit more than its original cost.

If you were to take a peek into a suburban living room in the 1950s, you are likely to see a group of women in funny hats playing party games, tossing lightweight plastic bowls back and forth and chatting about their lives as they passed around an order form for Tupperware and ate an abundance of snacks. These parties were more than they appeared, though. These parties were organized by empowered women who were thriving running their own businesses on their own terms. Tupperware parties became a way to break gender stereotypes of the 50’s housewives, and to reinforce those stereotypes at the same time by selling homemaker products to other women.

The History of Tupperware

These products were experiments in cutting edge technology in food freshness. Developed by Earl Tupper Massachusetts, Tupperware was introduced after World War II. They were a way to turn an industrial byproduct into an improvement in plastic and food storage. This Tupperware was a replacement to the glass kitchenware that had been popular in the 1920s – 1940s.

Making the product available in stores was a challenge because no one really understood what they were or how to use them. He needed an army of amateur salespeople to explain it and sell it to America. As the war ended and husbands returned home and to their jobs, many women who had worked through the war found themselves without a job. In many cases they were discouraged from working outside the home. They made perfect candidates for Tupper’s salespeople. In addition, the economy boomed after the war which led to busy suburbs full of middle-class families eager to socialize and to purchase his product. Thus, the Tupperware party was born!

“Tupper’s decision to invest wholeheartedly in amateur businesspeople and an informal, peripheral sales activity was either an act of inspired entrepreneurial vision or a reflection of his desperation,” writes historian Alison J. Clarke.

“Tupperware . . . took those moms out of the kitchen where they were ‘supposed to be’ and let them enter the workforce, and let them have something outside the home,” Lorna Boyd, whose mother Sylvia was a Tupperware dealer in the 1960s, told the Smithsonian Institution.

Shapes and colors of Tupperware ran in product lines and varied through the years. Some collectors recognize them on sight, but if you are newer to these products, you can look for the Tupperware brand name on the bottom of every single piece. Tupperware is also marked with a mold number, although sometimes very tiny. One selling point was that the products have a lifetime warranty. Even today, a shopper can use that mold number on the Tupperware website to activate the warranty.

How Much is Tupperware Worth Today?

Tupperware originally sold for $2 – $5 each. That was not considered cheap at the time. In 1946 a loaf of bread was just 10 cents! Today, there are only a few pieces that can bring big bucks. Sculptural Salt and Pepper Shakers from the 1960s can sell in the hundreds. Complete sets of bowls can bring $50 – $75. Of course, condition is a large factor in value. Generally, most single pieces sell between $5 and $20.

Though no one is likely to become a millionaire from selling old Tupperware containers (the pieces aren’t going for hundreds of dollars like vintage Pyrex dishes), select sets from the pastel-hued Wonderlier line or the Servalier line (which features bolder opaque tones) could certainly net the seller a few hundred dollars — depending on the condition and age of the pieces.

Where Can I Find Tupperware?

Estate sales are a key resource for digging for Tupperware products, especially if you can find a homeowner who was a sales representative. You might also find Tupperware at thrift stores. Even garage and yard sales may be a source of finding some Tupperware. E-commerce sites such as Etsy and eBay offer vintage Tupperware as well.

Of course, another great source of vintage Tupperware is at auctions. LAWSON & CO is an auction house and full-service real estate company that has personal property auctions on a regular basis. Come and see what Tupperware or other treasures you can find! Give us a call at 317-745-6404 or visit our event calendar at LAWSON & CO.