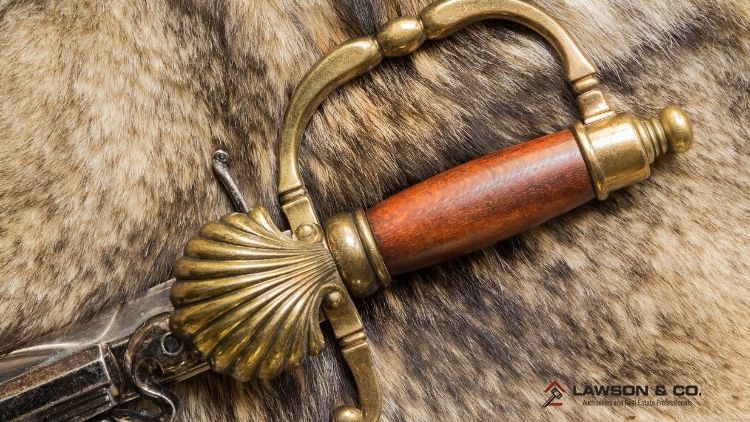 LAWSON & CO recently had a specialty auction including some fine swords. The reasons people collect swords vary. These valiant weapons are sought to add to a collection or maybe just to own a piece of history. As with many historical collectibles, there is a lot to learn about swords. Here is some information that will be helpful to get you started.

Parts of a Sword

First, let’s talk about the basic parts of a sword. The two main parts of a sword are the blade and the hilt. Swords are often accompanied by accessories such as a scabbard, sword belt or tassel. The more you know, the more you will appreciate swords and want to know more.

Sword blades are either single- or double-edged and meant to cut, thrust or both. Sword blades are precise instruments, and each section is crafted for a specific purpose. Let’s look at the different parts:

The hilt is where a sword is held. It consists of the guard, grip and pommel, made from leather, wood or wire.

There are several accessories for swords. Although they can be finely made and decorative, accessories also have purpose.

Swords have played a huge part in the history of the world. Through the ages swords evolved, not only in materials used, shapes, and styles, but different groups had different types of swords. That being said, swords were weapons for all.

Here are some of the most popular types of swords bought by collectors:

Do you fancy swords?

Although swords were weapons of battle, they were also historically influenced and many crafted by fine artisans. Some owners had their names engraved as well as dates and battles they survived. Swords meant a great deal to their owners, representing gallantry, skill, and courage. Collectors appreciate the craftsmanship, the history, and the pride that is evident in every sword they find.

When purchasing a sword – from a dealer or at auction, it is important to look for these factors:

That is why it is important to deal with reliable and trustworthy dealers and auction houses. In Central Indiana, you can trust LAWSON & CO for sword auction and appraisal needs. Watch our auction calendar listings for all sorts of collectibles and surprises. We often have specialty auctions that focus on specific items such as firearms, glassware, antiques, swords, art, or even fishing or farm equipment. If you have a collection to pare down, give us a call at (317) 745-6404.